Hey Guys, Adopt dogs and get great stuff to help too! Are you or someone you know looking to adopt a dog. Now is a great time with DogTV and they will give you all the goods to get started with your new love too!

adoption and showcase adoptable dogs in various locations around the country. Each week the show

brings individual stories of dogs that are up for adoption in order to encourage viewers to adopt them.

channels. Now for the first time, they will also distribute the show on Facebook’s new video platform,

waiting for adoption, and get many dogs adopted. Together, with prominent pet product

manufacturers, DOGTV will award adoption kits, valued over $600 each, to anyone that adopts a dog

through the show. The adoption kits include pet products from Dog is Good, Earth Rated, Humarian, I

and Love and You, Kong, Petcube, PupJoy, Surgi Snuggly and Victoria Stilwell Positively.

"We are very excited to be an advocate for shelter animals. Each dog has a unique story and our ability

Neumann, CEO of DOGTV Channel. "We look forward to placing many of these dogs in their forever

exposure –which work collaboratively to provide just the right balance for the daily routine of dogs.

DOGTV is the first and only television network for dogs. A trusted source of scientifically developed

content for dogs, DOGTV programming is organized into relaxing, stimulating and exposure segments

Products manufactured by APPA members can help pet owners with any first-aid needs. 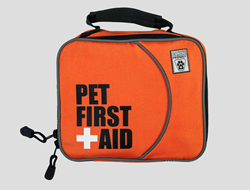 Officials at the American Pet Products Association (APPA) are proud to recognize National Pet First Aid Month this April with a look at some products, manufactured by APPA members, designed to help pet owners with first-aid situations and preventative care. This annual observance encourages pet owners to freshen up on pet first aid procedures, as well as ways to keep pets safe and healthy, especially heading into the warmer months of the year.

The Pet First Aid Kit by RC Pets gives pet owners the ability and knowledge to provide emergency help for their pet. It comes with a first aid instruction booklet with easy to follow instructions and medical supplies including gauze rolls and pads, bandages, scissors and an emergency blanket. This kit has everything one would need in an emergency situation. Price: $35.00 http://www.rcpets.com

Accidents do happen and if they do, Kwik Stop® Styptic Gel Swabs by Miracle Care tackle the problem fast. Filled with the Original Kwik Stop® Gel, the swabs come with a convenient single-use applicator, which helps begin the healing process on the spot and stop minor bleeding fast. The addition of Benzocaine helps reduce pain quickly. Perfect for first aid kits, travel, hunting, dog shows, performance events and everyday use. Price: $9.99 http://www.miraclecarepet.com

For pets that are experiencing inflammation, arthritis or post-operative procedures, Coolaid Canine Icing and Cooling Wraps have a variety of uses. Wraps are easy to use and for ultimate cooling should be soaked with water, wrung and placed in the freezer for approximately 30 minutes. Cool Aid has a variety of safety products to help pets with temperature control. Price: From $19.99 http://www.coolaid.com

Dog Boots by Pawz are waterproof, disposable and reusable dog boots that allow dogs and owners to enjoy the great outdoors safely. Made of natural rubber they protect pets from hot pavement, fire ants, grass allergies, mud and clay, pesticides, and irritation and dog run bacteria. Pawz are designed to go on easily and fit securely without zippers or straps and are available in seven bright summer colors. Price: $14.99-$19.99/per pack http://www.pawzdogboots.com

Post-surgery care can be hard to monitor but the Surgi Pro™ Derma Suit by Surgi – Snuggly has a unique antimicrobial infused directly into the material of the suit. This antimicrobial feature eliminates all yeast, molds, fungi and bacteria including ringworm and MRSA. The Surgi Pro antimicrobial is non-adaptive and effective in destroying bacteria on day 300 as it was on the first day. When worn, dogs may also experience less anxiety and is also useful for incontinence. This suit is a great alternative to the “cone of shame” that many dogs wear when recovering from surgery or an injury. Pricing: $39.99 - $54.00 http://www.surgisnuggly.com 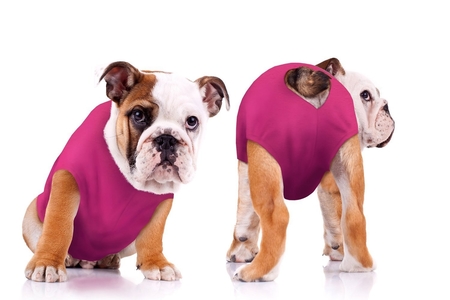 FOR IMMEDIATE RELEASE - BUFORD, GA -- It’s a rare pet owner who hasn’t had to watch his or her beloved dog run into walls and struggle to get food and water when their pet has been forced to wear an E-collar, otherwise known as the “cone of shame.” The Surgi ~ Snuggly is a comfortable, multi-use alternative to the inhumane E-collar.

The inventors spent two years testing and developing Surgi~Snuggly ™ The Wonder Suit to assure its fit, comfort, ease of use, textile construction and overall durability. The product made its debut at the 2011 AVMA (American Veterinary Medical Association) convention and earned a “Best New Product” title win from the AVMA.  The Wonder Suit is suited for sales in retail pet stores and for use and for sale in veterinarian’s offices. ( or veterinary hospitals)

The Wonder Suit has multiple uses including being a comfortable alternative to having to wear an E-collar following a surgical procedure, for dog incontinence, an anti-anxiety suit and for skin allergies and conditions.

Don’t let your pet suffer the cone of shame when he or she can be wearing what’s been called “Under Armour” for dogs.  Stop by our BOOTH #6486, meet our spokes -  dogs - Baby Wally and Buddy and learn more about this unique product.

Learn more about Surgi-Snuggly and watch the videos on our website. SURGI~SNUGGLY: “It is our mission to provide meaningful, useful products for you and your pets ensuring your lives together are the fullest, healthiest, and happiest.”  Tonua Williams, CEO Surgi ~ Snuggly.

I am thrilled to announce that the Surgi Snuggly was a 3rd place winner in the New Product showcase at the 2011 American Veterinary Medical Association conference last week!
Our official model Australian shepherd Baby Hannah, worked hard showing everyone exactly how to wear the Surgi Snuggly.
Thanks again for a wonderful week!
Tonua and The Surgi Snuggly Team

Come on out and meet us at the 49th annual Veterinary Conference and Alumni Weekend @ The University of Georgia March 23 - 24 in Athens, Ga!
We are very excited to come out and meet our local Veterinarians and introduce our product to many who have yet to see the Surgi Snuggly up close!

I'm thrilled to announce that the Surgi Snuggly team is heading to Destin, Florida for the upcoming joint Veterinary conference.

Come on by, We all look forward to meeting everyone!

Tonua and the Surgi Snugly Team

Come by to see the Surgi Snuggly in person! The Surgi Snuggly is a flexible, multi functional wound care garment allowing coverage of even the most hard to cover areas including full urogential and complete perianal.

The weekend is packed with a variety of CE.

"Veterinarians completing this course will become familiar with a broader range of treatment options for their referral patients, and will enhance their use and interpretation of diagnostics for management of their own patients. Topics will include endocrinology, emergency and critical care, gastroenterology, infectious diseases, ophthalmology and neurology. This event will also provide 2 CE hours of Georgia laws, rules and professionalism."

It is my mission to provide meaningful, useful products for you and your pets ensuring your lives together are the fullest, healthiest and happiest!
Tonua Williams, CEO Surgi Snuggly
© 2010 - 2020 Surgi~Snuggly ™. All Rights Reserved. Terms/Conditions
keyboard_arrow_up